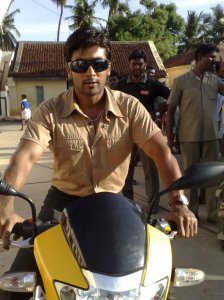 It’s a weekend but for Suriya, there’s no such thing as a holiday. One day, he’s a story discussion in Mumbai and the other he’s in Hyderabad for an ad shoot. No wonder Jyotika got him a mug with a picture of their pretty daughter Diya and a caption that reads: “My Dad has a part-time job. That’s me.”

And early on Monday morning, he’s up before five a.m. so that he can leave for the shoot location that is “halfway to Tirupati,” as he calls it. “Do you still want to come,” he messages me from his shoot at eight a.m.

“Jo’s career has always been as busy as this. I’ve been this busy only in the last two years,” he smiles. He’s trying hard to put his foot down to say he can’t shoot after six p.m. because he wants to spend time with his family, especially because he starts his day at six in the morning. He’s too polite to get the point across, I realise by the end of the day.

“Usually I start my day with a workout but I got home late last night and had to reach here early morning, so I didn’t have the time,” he says filling me in on his routine as stunt-master Kanal Kannan plans a fancy bike shot with director K.V.Anand outside a temple in Thiruninravur for his action entertainer ‘Ayan’. The scene requires Suriya to do a wheelie and the bike is all wired for the trick shots.

“AVM’s production planning is so thorough. We have a song sequence in Namibia and two and a half months before the shoot, they already know what time a train would pass the frame,” he says.

Between takes, he obliges women and children with autographs. “I ask them to study well.” It was in this very street in Thiruninravur that as Bala’s Nanda, he searched for his mother years ago. “After that shoot, I’m coming here only now.” Do they ask him to name babies? “In the villages sometimes but I refuse. I tell them to ask their elders to do that.” 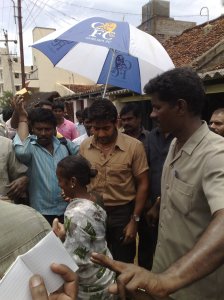 As we sit in the finely furnished air-conditioned vanity van, I ask him how he prepares for a role.

“I try to be as real as possible. I wouldn’t try to fake it or go through the motions mechanically. I try to live the character. Acting is a mix of instinct, intelligence and common sense. This role requires me to be a relaxed, casual street-smart guy… not the guy who knows everything.”

He points out he’s wearing a wig because he had to cut his hair too short for ‘Vaarnam Aayiram.’ “Since you didn’t realise it, I don’t have to worry even if I go bald,” he laughs. 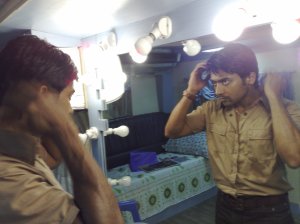 Did Aamir Khan call him to find out how he prepared for the Ghajini character?

“Well, he first called to say Congrats, you’ve done a fantastic job… Do you think I can do this role? I had to tell him how he’s been the inspiration for me all these years and that if I can do it, he would do a far better job than me. He had no ego hassles talking to a younger star. He could have managed it by himself but here he was asking me specifics on what trimmer I used for the line on the head. He wanted me to be a part of the mahurat, so I went to Mumbai to watch the shoot. Actually, he inspired me to get a six-pack and the role. Over the last one and a half years, he’s like a brother to me. I save all his messages. I dubbed for ‘Vaal Natchithiram,’ the Tamil version of Taare Zameen Par. I fully understood it only while dubbing it because I don’t know Hindi. He was so touched that I didn’t take money for it. He got me a Macbook Air,” he beams.

We go on to discuss the genius of Aamir and Taare Zameen Par at length as two fans before I get him to talk about his profession and what it takes. Is an acting school compulsory for actors?

“You go to an acting school to know yourself or you can find ways to push yourselves and see what you can do. I did Peralagan to see how much I can push myself.” 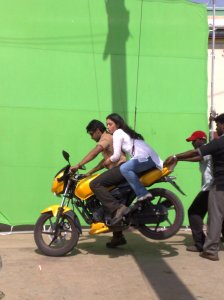 The scene being shot involves him arriving at the temple with Tammanna. On seeing his mother at the temple, he skids and turns the bike at a 180-degree angle (a stunt he does himself) as the stunt double for Tammanna (a man in drag and a wig) falls off the bike into the sand pit around. This is canned by about 2.30 p.m. as Suriya decides to help himself for lunch.

I notice Suriya eats very little. “I eat many little meals a day, I try to avoid carbohydrates.” He wants to be in a shape where he can put on his six-pack with just 20-25 days of workout. “It is unrealistic to maintain a six pack around the year. I don’t think it is healthy either. It was one of the toughest things. I couldn’t eat rice or bread or milk products, had to avoid even salt and stick to salad and chicken.”

Almost all mainstream Tamil heroes have a tag attached to their name, some combination of ‘Puratchi’ or ‘Ilaya’ or ‘Thalapathy’ with variations of ‘Kalaignar’ or ‘Star’ or ‘Nayakan’. Why haven’t you got one, Suriya?

He laughs. “As it is I have changed my name from Saravanan to Suriya, I don’t want another name. I want to give a fresh experience to people every time they come to see me.”

Unlike other stars who sit and sulk in the face of criticism, Suriya chooses to ignore it. Success hasn’t gone to his head. “There were days I used to beg for my salaries and say: All I am asking is money for my two and half months of work. I don’t want my Dad to go and act in some TV serial.”
How has being in a family of actors helped?

“If I find a script synopsis interesting, I would show it to Jo… she may laugh at it. When I show it to my brother Karthi, he gives me another perspective.”
Apparently, he never advises Karthi on what to do though. “When he signed his first film, I told him to trust Ameer. Whatever he does, I am really proud of him.”

As it’s time for the shot after lunch, his assistant helps him into his costume again.

Apart from his workouts, his shoots and dubbing sessions, Suriya makes it a point to spend time with his fans once a month and Agaram Foundation keeps him busy even between takes. 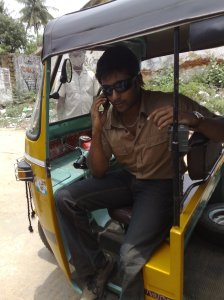 I notice he hardly interacts with Tammanna during the day apart from the pleasantries.

Does Jyotika have a problem if he does intimate scenes with his co-stars. “Anybody will have a problem. I am equally possessive,” he laughs.

How did he fall in love with Jyotika if that’s the distance he keeps?

“It happened when we were not acting together. I was basically her fan, then I became her friend, then co-star.”

Around eight p.m., it’s finally a wrap as director K.V. Anand explains that the delay was because of the wrong cranes that arrived for the stunt scene. Suriya has had to cancel his dubbing session for ‘Varnam Aayiram.’ He drops me back at AVM by nine p.m. and by the time he reaches home, it would be 16 hours since he last saw his daughter and wife.

Back at the temple however, the hundred odd people got a glimpse of their demi-god.