It was a tricky start.

After the RTFF Google group failed to agree on one genre with a three way split between heist films, noir films and black comedies, it was totally up to the curator to take a call on what he wanted to do for the very first edition of the revival of Roof Top Film Festival, Chennai, a movie marathon series started by Ganesh APP in 2008.

Smartly, Sandeep decided not to announce the genre so that people have to show up to find out. One of the things we had decided during the on ground meeting of RTFF was that the curator should be comfortable with the genre he’s hosting so that he can pick the best films to screen. And Sandeep felt most confident about heist.

I knew what to expect because Sandeep shared his shortlist with me and though we discussed the best options, the final list was going to be decided at the venue based on the questionnaire handed out to every participant on THE night.

So on September 17, the night of the revival edition curated by Sandeep, every camper was given a questionnaire with a list of 16 heist films and asked to tick the ones they had already seen. We had also decided was that we were surely NOT going to screen the obvious choices – films that every movie buff worth his bootlegged DVD had already seen. Reservoir Dogs, Oceans 11, Italian Job, Usual Suspects, Inside Man or Bank Job. What’s the point watching films you’ve already seen with people who had already seen them? Especially, when it’s really difficult to pack more than 4-5 films a night!

Our guess was right – Over 60 per cent had already seen The Usual Suspects and The Italian Job. Only one person had actually seen Bandits. So Sandeep decided to start with the necessary evil – one mainstream Hollywood film for the night.

I reached the venue about five minutes into the film and I was shocked by his choice. “Dude, this is not even a heist film!”

“But it’s about bank robbers, it’s about the Sleepover Bandits,” he said.

Maybe it was a good choice to start off the festival with a film that generates discussion on what is a heist film. A heist film essentially follows a certain structure and comprises of certain elements that define the genre.

“Inception is a heist film,” I told Sandeep.

We didn’t get down to discussing how Inception was a heist film because that would’ve totally taken over the night but I do wish our Roof Top campers were a little more enthusiastic about talking about the films they had just watched. After every film, someone had to ask them what they thought, every single time. Maybe we should have a moderator chosen by the curator who will facilitate discussions if the curator does not want to talk about the films himself.

It’s the conversation that makes RTTF a social event, after all.

Bandits was a buddy movie, a love triangle that was more about stealing your best friend’s girl than the money but thankfully, a decent climax after a long winded detour into the romance portions restored the theme for the night – heist.

It helped that the film brought in laughs at regular intervals and though, at least on paper, NOT the ideal start to revive the RTFF, it turned out to be just fine. Nobody objected because they watched a movie they hadn’t watched before.

It was also the longest movie that night – well over two hours and it was better slotted at the first film than somewhere in the middle being the weakest of the lot Sandeep had with him.

Sandeep wanted to start off with Godard’s Band of Outsiders, the film that’s been described as an anti-heist film, one that inspired Tarantino to call his banner A Band Apart. But due to a technical glitch (the DVD played only on a Mac and not Windows), he decided to play The Score but even that disc decided not to play. And so, Bandits it was. A harmless way to get things started, a buddy film with plenty of feel good & a cheeky ending to save us the blushes.

The big surprise for the night was kept under wraps because it would have been a huge disappointment had our mystery guest been unable to make it for some reason, especially with all the rain. Venkat Prabhu, who directed the superhit Mankatha, one of those rare heist films made in Tamil, had agreed to drop by and talk about his experience. Since he was expected around midnight, we decided to kill some time under the pretext of ordering dinner and playing a short film till it arrived.

We played Shor at 12.20 a.m, the 20-min short directed by Raj & DK that went on to get critical acclaim and also served as a pitch for them to make their feature on the same theme – Shor In The City. When people applaud at the end of the film, you know the fest is doing something right.

The next film for the night was Stanley Kubrick’s The Killing, one of the classic, definitive heist films ever made, one that inspired Quentin Tarantino to make Reservoir Dogs.

Before we could play that, the floor was open to discussing elements of a heist film. And the group seemed to reach a consensus that heist films have four parts – The Players, The Plan, The Execution & The Consequence/Getaway with plenty of scope for twists and turns and surprises.

On this note, we discussed where Mankatha worked despite its deviations into hero-worship and just when we were about to hit Play to get The Killing started, Venkat Prabhu made an entry. Surprise at 1 a.m! 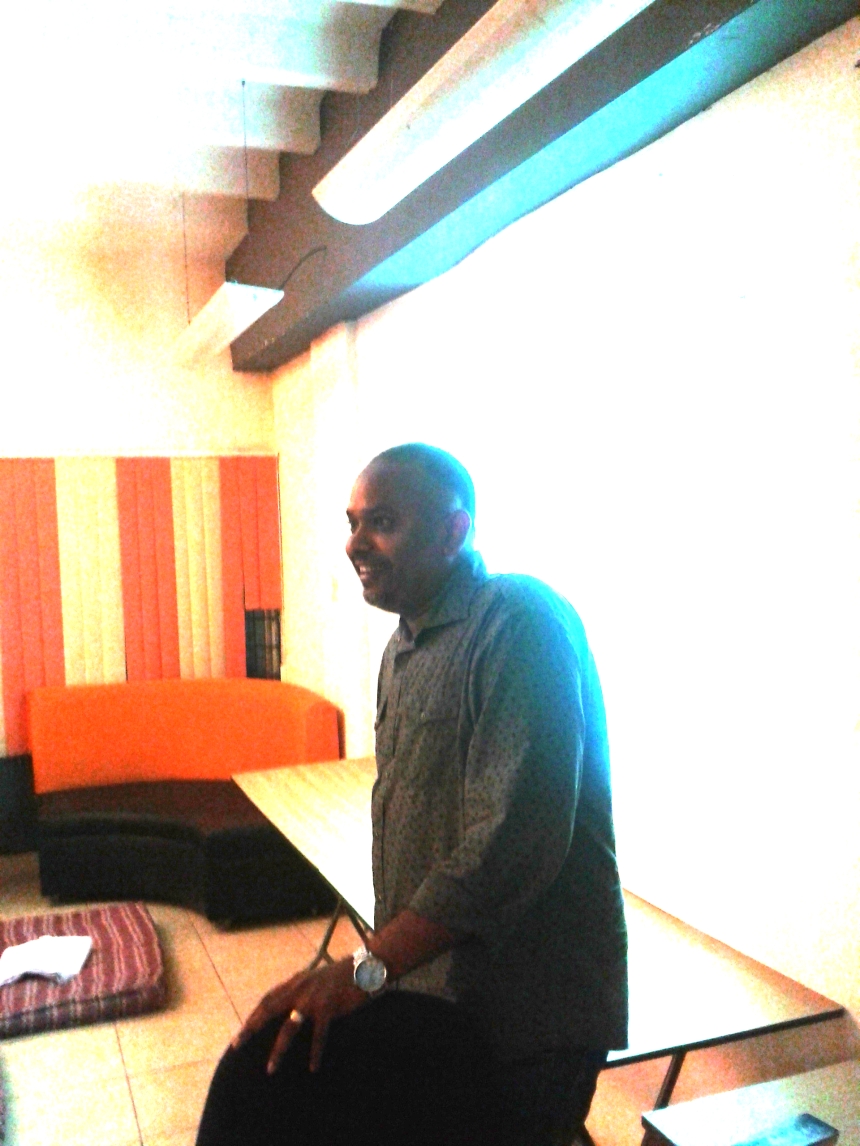 The next one hour was spent discussing how he made his heist film and how it changed considerably with market forces.

Of course, since most of it was off-the-record, on request by the director, we won’t blog about every candid detail he wanted to share with us. The old version of The Italian Job was the starting point for Mankatha. It wasn’t a script originally written for Ajith, it was meant to be a small film with his regular bunch of boys. And the fact that Ajith wanted to play one of the boys was one of the biggest reasons Venkat Prabhu decided to make this a bigger film than planned, especially with the potential and opportunity it presented with one of the biggest stars in showbiz agreeing to play a role that wasn’t typically heroic. But that was also what made it more and more original.

The crowd was hooked. Everyone got to ask him what they wanted and some more over dinner. We watched Kubrick’s The Killing after that and the film ended to more applause with its fantastic ending.

We discussed how the talkie nature of the film meant that every minutest detail was spelt out through voiceover and that this had to be evaluated in the context of evolution of cinema itself.

The next film only highlighted how cinema itself had changed. From black and white to Eastman Colour, from talking to showing as the focus shifted from dialogue to action in The Italian Job, something Sandeep decided to screen though one third of the group had already watched it because Venkat Prabhu had just spoken about that film. Italian Job was not just funny, it also boasted of spectacular action sequences. Turned out to be the perfect choice for the third film as a contrast to The Killing.

When the film is good and people are sleeping, you know it’s not the curator’s fault. More than 60 per cent of the campers had already gone to sleep or left when we decided to play the last film for the night at around 4.45 a.m. Ringo Lam’s City on Fire, another film that inspired Tarantino to make Reservoir Dogs, the film about the undercover cop and a heist gone wrong, with its men in suits shades walking in slow-mos and the bloody Mexican stand-off for a finale.

By the time, we called it a night, it was already about 7 in the morning. A night well spent.

And RTFF got off to a start with a bang, thanks to Sandeep Makam, the curator and Vijayanand, founder of Startup Centre, Alsa Mall, our host for the night.

The next edition of RTFF will happen in October and will be curated by Vijay Venkataramanan, who used to programme for the Indian Film Festival of Los Angeles. Vijay is a professional film editor with quite a few films to his credit, including my own ‘Good Night Good Morning’.

He already has a bunch of films he has sourced and one thing’s for sure, you will not get bored. Follow @ChennaiRTFF & @vsnipz to stay tuned about the theme for the next edition. Also join the RTFF Google Group & like the Facebook page to stay updated about upcoming fests.