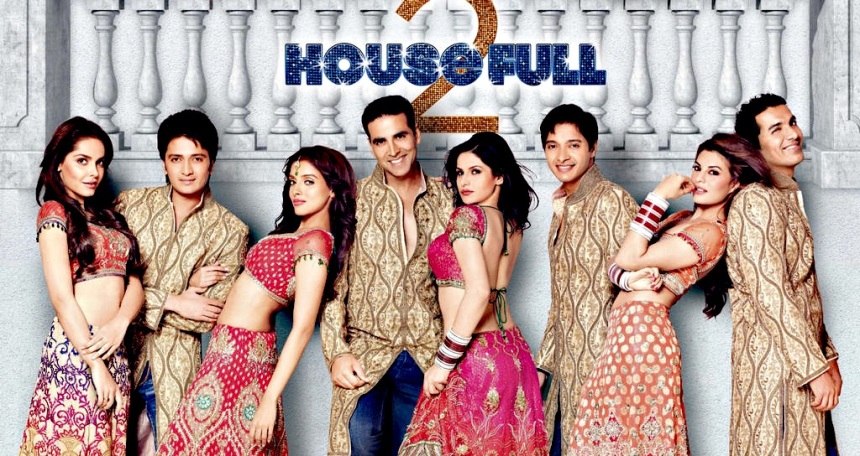 Storyline: The heir to a rich empire makes two con-men pretend to be him to help out a friend as the sitcom spirals into a comedy of errors.

Bottomline: Silly, juvenile, stupid but fun if you are easily amused.

Now, I didn’t like Housefull because it tried hard to be funny (I don’t find people slapping each other funny) and it stole from the worst of Hollywood while borrowing the major part of its plot from the play Right Bed, Wrong Husband (that also inspired Kadhala Kadhala in Tamil, Hungama in Telugu and All The Best in Hindi) not because I don’t like the genre. Nobody did it better than David Dhawan in the nineties.

So I don’t have a problem with that genre or how crude or distasteful the humour is as long as the jokes work.

Housefull 2 takes pretty much the same situation from the first part but with twice the confusion and this is not exactly easy to pull off with at least 14 characters (15 if you include Malaika Arora’s Anarkali) contributing to the madness.

If the first part borrowed most of its gags from bad Hollywood films, this one finds itself home fondly looking back at old school Hindi cinema for inspiration. However, be warned that it’s long and the drama, especially the action scenes, really seem out of place in this narrative stretched to a point of excess.

The good part is that jokes work much better in Housefull 2, a film I was sure I would hate after the trailer that promised exactly the ridiculous kind of insanity one can expect out of this film.

Housefull 2 turned out to be funnier than what the trailer promised.

Akshay Kumar will love this, he finally seems to have got his confidence and comic timing back. His take on Ranjeet’s lecherous ‘Aaaye’ is a hoot (incidentally, there’s a fine cameo by “the rapist” villain Ranjeet himself as towards the end with the best gag reserved for the end-credit sequence).

John Abraham still seems to be having trouble with comedy but is easy to overlook in an ensemble like this while Riteish and Shreyas are wasted playing the foil for the two leading men.

The glam dolls (Asin, Zarine, Jacqueline and Shazahn) are just silly caricatures, the physical comedy involving animals is often as contrived as you would find in the weaker Farrelly Brothers movies nor can Malaika Arora act… But who’s paying to watch Malaika “act”. Her ‘Anarkali Disco Chali’ alone is worth the price of admission.

There’s just so much comic talent in the film to ignore, especially from the senior citizens in the cast. It’s great to see the original Disco Dancer let his hair down and having a blast while the reliable Kapoor brothers – Rishi and Randhir – are always a delight to watch. And there’s Boman Irani, Johnny Lever and Chunkey Pandey back as Aakhri Pasta as a bonus.

It’s certainly not the kind of cinema a critic ought to advocate simply because its success can spurn half a dozen sequels or worse, Anees Bazmee films but unfortunately, this is the kind of fare that has come to pass off for Andaz Apna Apna for this generation.

If you grew up in the nineties, I should maybe quickly add… Like Aakhri Pasta would say: I’m-a-Jo-King!

An edited version of this review appeared here.

P.S: And as for what I think about Sajid Khan and his attitude towards criticism, that’s a different story altogether.